I have been making short films and engaging in performance art since 2002, having studied performance, drama improvisation and contemporary fashion design. My performance art has been exhibited in the UK and overseas.

My current project is ‘Bardsea-Green Films’. Founded by Paul Alan Rigg and myself in 2016, we make low-budget, short and satirical films, inspired by Monty Python, The Goodies, surrealism, and the local history and folklore of Cumbria.

The #ismofblah is a narrative to the absurdity of modern existence in an age of Fake News; 24 hour news; social media; reality TV; celebrity gossip; false prophets; blah, blah, blah. 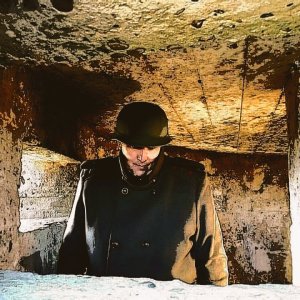 My working ethos comes from the quote – “Adventures in the mountains is not about being the best, whoever is having the most fun is the best” – it’s been the late 1990s since I’ve done any serious mountaineering, but the message is the same, take an idea and go, create, have fun. Life is too short to take it seriously.

#LostLaika – our low-budget homage to B-movies, silent film, with a dash of Tarantino

The Bard of Cumberland

The Bard of Cumberland